Aside from their primary area of focus, the reality is that every enterprise is now also in the software business.

CIOs and CISOs everywhere must now provide apps of high quality and solid security that are expected to rival those of Amazon, Google, or Meta. Updates must be released regularly to address security concerns, fix bugs, and incorporate new features and functions to remain competitive.

This constant need for innovation drives how companies build, run, and secure their applications.

During this continuous cycle of innovation, one crucial metric enterprises must keep track of is commit-to-deploy time, which measures the amount of time it takes for a commit to reach production. The lower the deployment time, the less expensive it is.

While this speed can benefit customers as they can enjoy app improvements faster, it presents a significant challenge to security teams to ensure that all deployments are tested for vulnerabilities.

Despite the advances in security platforms throughout the years and the effort to shift left, security is still the most time-consuming phase of today’s software development cycle. The problem is that anytime the application code is touched, it presents the opportunity for new vulnerabilities, PLUS the recurrence of past vulnerabilities to surface.

Consider that the average company uses over 200 applications, so the scale of the above security checks suddenly goes well beyond what almost any company can handle. In fact, because of this challenge, 79% of companies knowingly push vulnerable code to production. This process isn’t working, and we believe there is a better way.

Security-as-Code is the practice of leveraging machine-readable definition files that use high-level descriptive coding language to automate security behavior in the runtime.

In a nutshell, it enables security teams to define once and secure constantly. On the flip side, this allows the application engineers the time to focus on development rather than remediating vulnerabilities discovered by the security teams.

Ultimately Security-as-Code is the modern way to scale security with modern software development.

What can Security-as-Code do for me?

Understanding what it is, here are five key business capabilities that Security-as-Code can provide any enterprise – large or small. We’ve gathered real-world examples to show how enterprises benefit from their Security-as-Code initiatives.

Security-as-Code enables more agile development and security. You can now remove complex and manual security operations from the modern software development process. Instead of engineering teams writing code and handing it off to security to scan, investigate, and give feedback, you now proactively secure vulnerabilities through policy instead of waiting for problems to arise during testing or deployment.

Security-as-Code allows your IT teams to safeguard a more significant number of applications across many servers, both on-premise and in the cloud. The protection applied through Security-as-Code is immutable, meaning no one can introduce code to the codebase that can supersede the security defined on your policy. Immutable security shortens the software development process for all your applications, not just the top five (the only ones you had the capacity for).

One of the top three auto manufacturers was able to identify and patch Log4j vulnerabilities across thousands of applications within 3 minutes, without developer involvement or support tickets. See how they were able to do that in this video.

Security-as-Code can help your enterprise cut costs drastically if you’re operating at a massive scale.

Security-as-Code transforms the economics of application security by removing toil from the modern software development process. Before Security-as-Code, security teams often manually scanned applications for new and reintroduced vulnerabilities, then went back and forth with engineering to fix the vulnerabilities before deployment, or rolled the dice and hoped their Web Application Firewall (WAF) would stop potential exploits.

Security-as-Code goes one step further than typical security solutions that make educated guesses about the exploitability of an application by treating the symptom instead of the cause of an exploit.

When your security platform treats a cause rather than a symptom, security teams achieve autonomy and no longer rely on time and effort from engineering.

The result is a streamlined process to build modern software with no time wasted.

Alcatel-Lucent, a global telecommunications equipment company, approached Waratek to learn more about Security-as-Code to remediate a crypto-miner they knew but couldn’t remediate without completely rebuilding their infrastructure and deploying their application from scratch. They could secure the vulnerability through Security-as-Code, saving dozens of engineering hours and unknowable expenses through further exploits.

Consider that most typical security platforms are expensive and tedious, making it challenging to protect more than a handful of applications both economically and with human capital.

When your security team scans an application or receives an alert about an exploit, they must first investigate whether the results are credible. According to our latest industry report, 59% of security teams spend days, weeks, or even months per year, investigating false positives.

Coupled with the introduction of autonomy to the security team, the result of removing false positives is an enterprise that is, for the first time, capable of economically securing every application.

A major hotel chain is an early Security-as-Code adopter and has realized significant cost savings. For the past three years, they’ve successfully secured 2,500 applications in production at scale, resulting in better IT resource utilization.

Enterprises must detect assaults in less than one minute, investigate them in under 10 minutes, and resolve them in an hour or less to minimize losses.

The most significant advantage of Security-as-Code is that it reduces the time-to-remediation to milliseconds, eliminating attacker dwell time. Security-as-Code enables teams to deploy new rules in real-time without downtime or deployment.

A Fortune 100 bank and long-term Security-as-Code adopter had significant issues with legacy Java and consistently failed to meet the requirements of the PCI standards council. After implementing Security-as-Code, the bank remediated all 29 Java 6u19 vulnerabilities identified by Qualys, and performance overhead improved by nearly 7%.

A primary goal of the DevSecOps movement is to reduce the feedback loop between engineering and security.

Security-as-Code fulfills that objective by removing the need for a feedback loop, allowing engineering and security to do their respective jobs effectively and safely without unnecessary back-and-forth.

Using the Security-as-Code approach can help security scale, and the entire modern software development process can stay agile throughout every step.

The net result is that both groups can focus on their KPIs while only overlapping when joint projects emerge, not just in the case of an emergency.

There you have five reasons why every CISO should consider Security-as-Code.

You likely still have questions such as:

Waratek has built the only solution to help your teams get the most out of the Security-as-Code approach and scale security with the modern software development process.

Want to learn more about how to answer all of the questions above? Check out our self-guided demo. 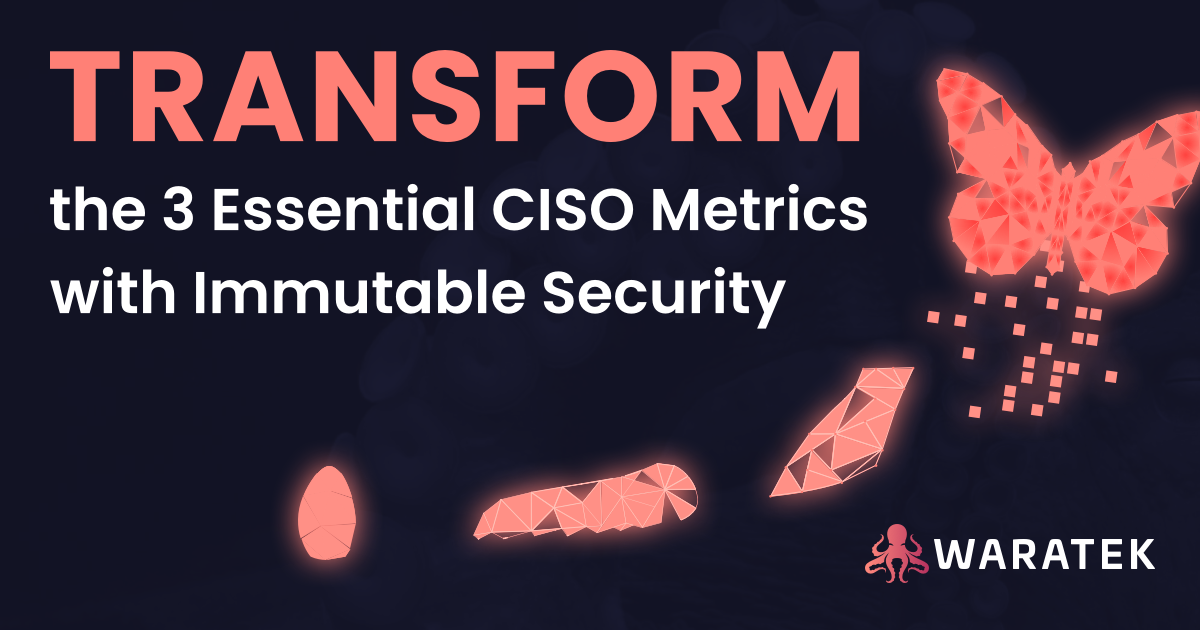